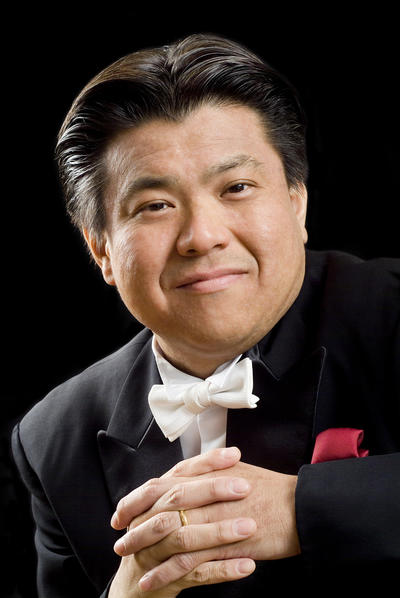 Yasuo Shinozaki became chief conductor of the Shizuoka Symphony orchestra in September 2015 after serving as the orchestra’s music advisor.

Shinozaki was born in Kyoto in 1968. At Toho Gakuen College he studied conducting with Nanao Yamamoto and Taijiro Iimori. After completing the upper-level course in the conducting department, he made his opera debut conducting “The Marriage of Figaro.” In 1993 he won the highest prize in the Antonio Pedrotti International Conducting Competition. He went on to train with Ilya Musin and Myung-Whun Chung at the Accademia Musicale Chigiana; Leopold Hager and Yuji Yuasa at the University of Music and Performing Arts Vienna; and Seiji Ozawa and Bernard Haitink in the Tanglewood Music Festival Seminar.

In 1998, Shinozaki made his debut in Japan conducting a subscription concert of the Tokyo City Philharmonic Orchestra. He received critical praise for the “strong presence and passion of his conducting” (Ongaku Gendai magazine). In 2000, he won 2nd Prize in the Second International Sibelius Competition. The final round of the competition was broadcast live on Finnish television. Shinozaki received the strong endorsement of the Helsinki Philharmonic, and later he went on to conduct the orchestra in a subscription concert.
Starting in 2001, Shinozaki served as assistant conductor of the Los Angeles Philharmonic Orchestra. In this capacity he was involved in performances of a diverse repertoire spanning classical works to world premieres of contemporary compositions, in over 40 concerts. During this time, in 2002, he made his subscription concert debut, replacing a guest conductor on short notice. The success of this appearance earned a great deal of attention, and Shinozaki was nominated for the Los Angeles Weekly’s music award for “Outstanding Classical Artist.” In the period before the completion of his term in 2004, his relationship with the orchestra became very close and productive, and he received high praise from many quarters.

*A magical time at the Hollywood Bowl! What a performance!
This “Eroica” can be counted as one of the all-time great performances. (Los Angeles Weekly)
-- Beethoven: “Eroica” Symphony, with the Los Angeles Philharmonic

*Shinozaki had something special.
I felt as if my love and respect for music increased as I listened to his music. (Los Angeles Times)
-- Tchaikovsky: Symphony No. 5, with the Los Angeles Philharmonic

*I am astonished by the work of Yasuo Shinozaki, a conductor who makes music come to life. (Argus, London, 2009)
-- Sibelius: Symphony No. 2, with the London Philharmonic

In 2004 Shinozaki relocated to London and focused his activity on concerts in Europe, conducting major orchestras in numerous countries including the BBC Philharmonic, Bournemouth Symphony, Frankfurt Radio Symphony, Finnish Radio Symphony, Swedish Radio Symphony, Belgrade Philharmonic, and Latvian National Symphony. His performance of Beethoven’s 7th Symphony with the Nuremberg Symphony Orchestra received high praise from the audience in Germany. Shinozaki has appeared with such renowned soloists as Andre Watts, Emanuel Ax and Yuri Bashmet. In January 2007, he became chief conductor and artistic director of the Kymi Sinfonietta in Finland, and earned attention for ambitious projects including the launch of the series “Beethoven and 20th-Century Viennese Composers.” He also conducted highly successful concerts in London and Saint Petersburg, and worked tirelessly towards the remarkable development of the orchestra before retiring from his post in July 2014. The length of his seven and a half year tenure with the orchestra was nearly unprecedented in Finland.

*Shinozaki demonstrated an impressive conducting style which strikes a clear balance between a solid and highly confident energetic side, and a deeply complex and emotional soft side. (Neue musikalische Horizonte, Magdeburg, Germany)
-- Toshio Hosokawa, “Circulating Ocean,” with the Magdeburg Philharmonic Orchestra.

*Yasuo Shinozaki conducted with enormous energy, and the orchestra responded to that energy. At the end, the audience responded, too, with a long standing ovation. It was a masterly performance of a timeless masterpiece. Michael Green (Artsmart.co.za)
-- Beethoven: Symphony No. 7, with the KwaZulu-Natal Philharmonic